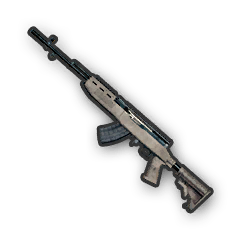 
The SKS is a rifle that provides a median between the assault rifle and sniper rifle category. It boasts a slightly higher range and damage than the average assault rifle, and is effectively a lesser sniper rifle in this sense. This rifle excels in medium-range combat and can almost immediately kill someone if used correctly in CQC (close-quarter combat), but will become less effective in long-range combat as more shots will miss, thus wasting ammunition