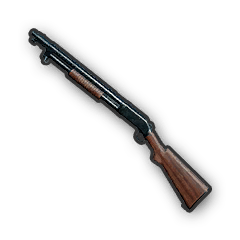 The S1897 is modeled after the Winchester Model 1897, designed by John Moses Browning. It was standard issue to the US Army, Navy, and Marines through the Philippine-American War all the way through the Gulf War. 1,024,700 have been produced during their service era. The gun is typically chambered for 12 and 16 gauge, though in the game, it's chambered solely for 12. The gun is largely used as part of police and special forces equipment due to its ability to quickly clear tight areas and its effectiveness in close combat.