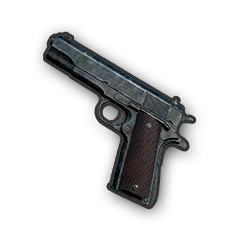 The P1911 is based on the M1911 Pistol designed by John Browning. The weapon has been used in the US military since 1911, starting its service in World War I and continuing through to the modern day conflicts of the Iraq War and the Syrian Civil War. It is officially used by 28 nations, with the US alone having purchased around 2.7 million 1911's and variants thereof during its service life.

The gun is chambered for .45 ACP, a slim round with incredible stopping power. What it loses in range it more than makes up for in ability to inflict damage, as the .45 ACP is powerful enough to do huge damage to bodies as well as light armor and even some types of metal in engine blocks.