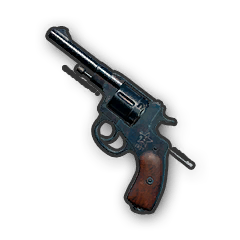 The R1895 is based on the Nagant M1895, a seven-shot, gas seal revolver originally issued to members and combatants in the Russian Empire. It was originally chambered for the proprietary 7.62x38mmR round, but because of its dimensions, it can also fire .32S&W, .32S&W Long, and .32H&R Magnum cartridges.