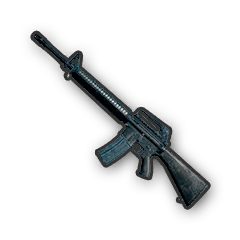 The M16A4 is the fourth generation of the M16 series. The series entered the US military in 1964 during the Vietnam War, and replaced the M14 as the standard service rifle. The rifle itself has many chambered variants, with the original chambering being 5.56 x 45mm with a 30 round magazine. The M16 version in PUBG is not actually a M16A4, but rather an M16A2. The main difference being that the A4 has a full length quad Picatinny rail for mounting optics and other ancillary devices, re-introduces full-auto firing mode in the trigger group, and Knight's Armament M5 RAS hand guard.