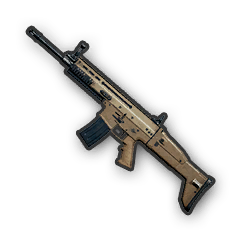 The SCAR-L is the light variant of the FN SCAR (Special Operations Forced Combat Assault Rifle), a gas-operated short-stroke gas piston automated rifle chambered to a variety of casings. It was originally developed by FN Herstal for the United States Special operations Command (SOCOM) as an entry to the SCAR Competition, a competition to find the new service rifle for SOCOM. As of 2015, the rifle was in service in over 20 countries.