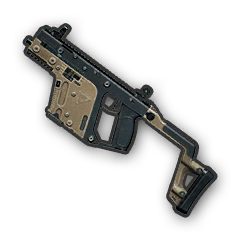 The Vector is the real-life counterpart of a submachinegun named KRISS Vector which uses an unconventional delayed blowback system to mitigate recoil. The KRISS Vector is a powerful submachine gun that randomly spawns around the map, and is mostly useful in close to mid-range combat. The weapon's characteristics boasts a very high firerate while still having a controllable recoil and good damage, while still having a healthy amount of attachments to further complement the weapon usage. The Vector's characteristics also have some drawbacks, meaning a high firerate weapon firing a pistol cartridge means long-range engagements are difficult or even downright impossible to do. Its really small magazine size means tight trigger dicipline and a very high precision while wielding it is a must.