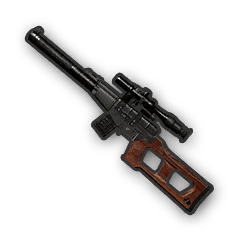 The VSS Vintorez has the same name in real-life, which shoots the 9x39mm sub-sonic ammo (in-game version uses 9mm ammo) and used primarily for stealth operations. The VSS Vintorez shoots common 9mm ammo in both semi-automatic and fully automatic firing modes. It deals very low damage compared to other sniper rifles, but because of the integrated suppressor and the use of sub-sonic ammo, players cannot hear the crack of the passing bullets, makes it extremely difficult to detect when being fired on by this weapon.